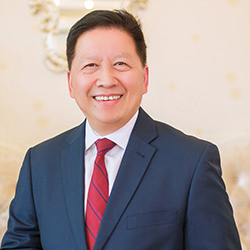 Dr. Charles C. Nguyen is a researcher, educator, administrator and presidential appointee.  He has served as Dean of the School of Engineering at the Catholic University of America (CUA) since 2001 and is currently Professor of Electrical Engineering and Computer Science at CUA.  He is the first Vietnamese American Dean of a college at a major university in the United States.  He received his Doctor of Science in 1982 from the George Washington University (GWU). Professor Nguyen has published over 100 technical and scientific papers in the area of control and robotics, co-edited three books and guest-edited 10 special issues in major journals. Dr. Nguyen is a member of ISMM, Sigma Xi, and a member and Chief Faculty Advisor of Tau Beta Pi Engineering Honor Society. He is Fellow of AAAS and a Senior Member of the IEEE, a senior member of Society of Manufacturing Engineering (SME), and a senior member of Robotics International of SME. He is a member of the Board of Directors, Asian Division of the U.S. Library of Congress and member of the Board of Directors, Library and Education Assistance for Vietnam (LEAF-VN). He has served as a member of the Advisory Board of the Vietnamese Culture and Science Association (VCSA) and is a member of the Global Engineering Dean Council (GEDC). He is a member of the American Society for Engineering Education (ASEE) and has served as a member on the ASEE Dean’s Council.

He was the recipient of the "Research Initiation Award" from Engineering Foundation in 1986 and was awarded NASA/ASEE Fellowship Awards in 1985 and 1986. He was the recipient of the "Academic Vice President Research Excellence Award," in February 1989 from CUA and the Distinguished Alumni Scholar Award from the GWU in 2002.  Among many other awards, he received the Lifetime Achievement Awardfrom the World Automation Congress (WAC) in June 2004 and the Community Service Award from Asia Entertainment in August 2004. He was a recipient of the Tenth Anniversary Award from the International Journal of Intelligent Automation and Soft Computing (AutoSoft), for contribution as founder, past editor-in-chief, founding editor and advisory board chair of AutoSoft, July 2006.  He received the 2006 Excellence in Community Service Award from the Vietnamese American Medical Research Foundation in 2007, the Leadership Award from INEER in 2007 and the Lifetime Achievement Award from DCCEAS in 2009. In 2014 the received the Asian Heritage Award from the Asian Heritage Society. In May 2004 he was appointed by President Bush to serve on the Board of Directors of the Vietnam Education Foundation (VEF). He was appointed to serve on the Foreign Service Selection Board for the United States Department of State in June 2010 and July 2013.

His research interests lie in the areas of medical robotics, time-varying control systems, control of large space structures, decentralized control, control of robot manipulators, closed-kinematic chain manipulators, robot vision, intelligent control and neural networks. His research has been continuously funded by government agencies such as NASA, US Air Forces, JPL, and Engineering Foundation. He has been the principal investigator of 15 research projects.